From the earliest days of the Web, David Weinberger, Ph.D., has been a pioneering thought-leader about the technology's effect on our lives, our businesses, and most of all on our ideas. 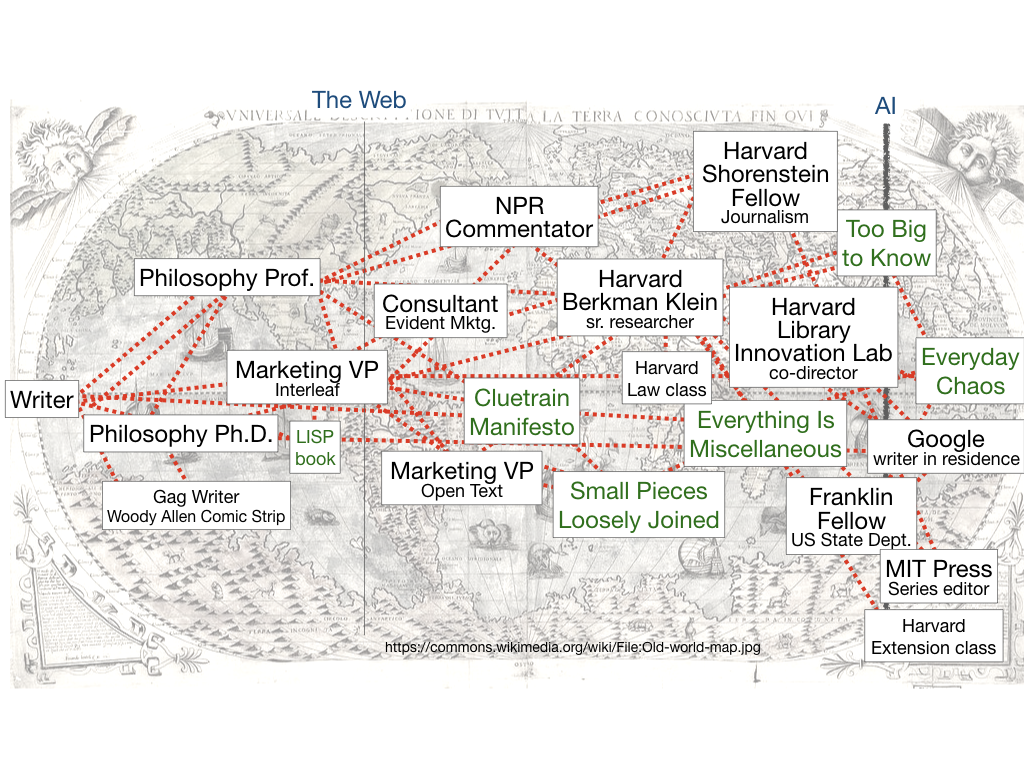 NOW with Truthy Popups! Hover over the green text in this section to peel back the hype and see the whole story.

NOTE: Please don't use the following as a way of introducing me as a speaker. It's bad enough in print. It's totally cringe-worthy when read out loud. Instead, please click here for a page with some suggestions about how to introduce me. Thank you! Sincerely.

The Wall Street Journal called him a "marketing guru." He's the co-author of the The Cluetrain Manifesto, the bestseller that cut through the hype and told business the truth about the Web: it's a social space before it's a commercial one.

His most recent book, Everyday Chaos: Technology, Complexity, and How We're Thriving in a New World of Possibility", puts AI in a unique perspective: a way of letting us acknowledge, engage, and succeed with the chaos that has always been all around us. It was named Best Business Commentary of 2020 by Axiom, one of the Top Three Books for Readers by HBR Press, one of the Top 5 Big Ideas Business Books by BookPal, and more.

His 2002 book, Small Pieces Loosely Joined was published to rave reviews hailing it as the first book to put the Internet in its deepest context. In 2007 he wrote Everything Is Miscellaneous: The Power of the New Digital Disorder, which has been called "an instant classic". It explains how the new rules for organizing ideas and information are transforming business and culture. His 2012 book, Too Big to Know: Rethinking Knowledge Now That the Facts Aren't the Facts, Experts Are Everywhere, and the Smartest Person in the Room Is the Room won two international best book of the year awards. The theme through all of these: Tech is challenging and changing some of our most basic ideas.

He's been a frequent commentator on National Public Radio's All Things Considered and has written for the "Fortune 500" of business and tech journals, including The New York Times, Harvard Business Review, Scientific American, The Atlantic, The Boston Globe, USA Today, The Guardian, and Wired. Journalists from The New York Times, Newsweek, Time, The Boston Globe, The Los Angeles Times, InformationWeek, The Economist, Foreign Policy, the Wall Street Journal, CNN, and many more turn to him for insight. He has been a columnist for CNN.com, United Airline's premium in-flight magazine, Knowledge Management World and il sole 24 ore,.

He was a philosophy professor for six years, a gag writer for Woody Allen's comic strip for seven years, a humor columnist, a dot-com entrepreneur before most people knew what a home page was, and a strategic marketing consultant to household-name multinationals and the most innovative startups.

He has a Ph.D. in philosophy and has a long affiliation with the prestigious Harvard Berkman Klein Center for Internet & Society as a Fellow, Senior Researcher, and on the Fellows Advisory Board. During 2010-2014, he was Co-Director of the Harvard Library Innovation Lab, and was a Franklin Fellow at the United States State Department (2010-12). In 2014, Simmons College awarded him an honorary doctorate in humane letters. In the Spring of 2015 he was a fellow at Harvard's Shorenstein Center for Media, Politics, and Public Policy. In 2018 he began two years as a writer in residence at a Google machine learning research group.

He is also one of the most entertaining and acclaimed presenters around.

Dr.. David Weinberger turns this remarkable range of experience and knowledge to the most important question facing every business today: How is technology changing the way employees, partners and customers are putting themselves together, and how is that changing the basics of business, culture, education, politics, government...